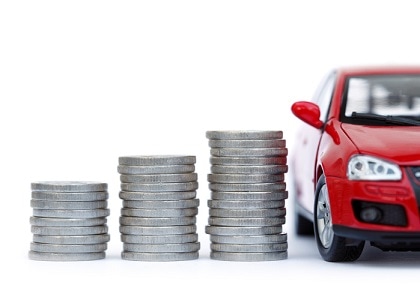 Coin rolls and a red car, isolated on white background.

Car premiums seen to surge 29% by 2018
Motor insurance premiums could skyrocket by up to 29% by January 2018 due to various factors including increases in taxes and in the personal injury discount rate.

This is the forecast of specialist motor insurer ERS, which expects the average premium to rise from £60 to £360 for standard car drivers and £720 to over £3,000 for commercial drivers.

“This is a pivotal year for motor insurance, with a range of factors converging which will translate to higher premiums for every motorist,” said ERS chief executive Ian Parker.

“We estimate the combined impact of factors including Ogden, Vnuk, claims inflation and reinsurance to premiums will lead to price increases of up to 29%, costing drivers hundreds of pounds,” he adds.

“That increase is a bitter pill to swallow for many people who expect that the cost of their annual motor policy, without a claim, should decrease.”

​ERS says the key factor influencing the cost of insurance is the Ogden rate cut in March which could increase premiums by £21 for the average driver and by £330 higher for a taxi driver.

Another looming shock is a further hike in Insurance Premium Tax from 10% to 12% in June. This will result in an extra £5 for standard drivers and £45 more for commercial drivers, according to ERS.

An additional £3 increase in premium for car drivers and £25 for taxi drivers could also be expected, ERS said, following the European Court of Justice’s ruling in the Vnuk case, which could mean compulsory insurance must cover accidents involving a vehicle’s “normal function” – including cars driven on private property.

Premiums for the average motorist and taxi driver may further increase by over £30 and £327 respectively due to higher reinsurance and repair costs, ERS said.

The insurer’s predictions highlight the need for brokers, with its chief executive stressing that motorists should seek the knowledge and expertise of brokers instead of just using comparison websites for their insurance purchases.

“These comparison sites aren’t great at dealing with difference, so anyone with a slightly different vehicle or driving background often doesn’t get the right insurance,” Parker said.

“It doesn’t cost anything to use a broker and their industry knowledge and access to insurers’ specialist underwriters means they can give you a comparison that is more tailored and better value for money.”