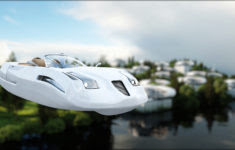 Flying cars will be zipping across U.S. skies within the coming decade—at least that’s what Uber Technologies Inc. Chief Executive Officer Dara Khosrowshahi predicted last month.“There will be people flying around Dallas, Texas,” Khosrowshahi said at the DLD tech conference in Munich in January, his first public appearance in Europe since taking over the top job at Uber last year. “I think it’s going to happen within the next 10 years.”
Uber partnered with NASA last year to develop new traffic concepts that will enable safe and efficient operations of robotic flight systems, and it is working with aircraft, infrastructure and real estate partners to operate fixed routes between city hubs. The company’s vision for the network, dubbed “uberAir,” would let customers push a button and get high-speed flight in and around cities, Uber said in November.
Back down on the ground, the Uber CEO cited congested cities as one of the issues his company can help solve—for example, by increasing the number of electric vehicles. Fully autonomous taxis are still 10 to 15 years away, however, because of the effort needed to create 3-D maps and since sensors are still too expensive, he said.
Uber plans to expand to more cities in Germany this year and has new plans for London. The CEO said Uber has committed to have a hybrid or electric fleet in London—”if they let us back in.” For Uber Eats, which Khosrowshahi said is “absolutely exploding,” he predicted it will be the largest food-delivery company in the world this year.
“We are now going from growth at all costs to responsible growth,” Khosrowshahi said, as local taxi drivers demonstrated outside, whistling in protest over the competition from the U.S. startup. Uber’s corporate culture crisis last year was so great that Khosrowshahi didn’t need to convince anyone that change was needed when he came in, he said. Now, Uber is committed to doing “the right thing, period.”