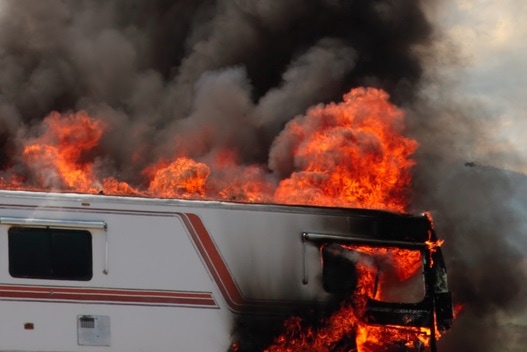 An RV is engulfed in flames at the side of a highway on a hot summer’s day. So much for the vacation…

​A Hollywood stuntman who has worked on big projects including Game of Thrones, The Dark Knight Rises and Gladiator has been convicted of insurance fraud.

Ray Nicholas, 57, faced Liverpool Crown Court as he was accused of burning down his motorhome in a £20,000 insurance scam, media reports said.

According to the Liverpool Echo, authorities found the motorhome on fire in a layby in Derbyshire in August 2015 after Nicholas reported that it had been stolen.

Footage from automatic number plate recognition cameras later showed that a car registered to Nicholas’ partner, Michelle Buckley, had travelled to the layby on the same night that the motorhome was allegedly stolen.

Further evidence later revealed that Buckley’s vehicle tagged along the motorhome on the night of the supposed theft.

This showed that Buckley’s car was used to bring Nicholas back home after he torched his car, the prosecution said, according to the Liverpool Echo.

But instead of being sentenced to prison, Nicholas was only ordered by the court to pay investigation costs and attend a rehab course due to his health problems and lack of previous convictions.

Article is care of www.insurancebusinessmag.com and can be found here