IIHS: Knee airbags don’t do much for belted occupants

By Tim Kelly9th August 2019No Comments 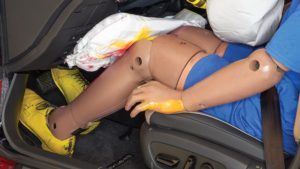 In fact, it’s possible the supplemental restraint systems can inflict more injuries upon the occupant, the IIHS said Wednesday.

If OEMs reverse a trend of what the IIHS called “increasingly common” knee airbags, it could reduce severity and repair complexity on two levels.

Obviously, there’d be less work and parts expense to remove and replace or remove and install the airbag. But there’d also be one fewer item to check in what repairers indicate could be an intensive — and therefore expensive — mandatory inspection process following collisions.

Besides reducing cost of ownership/insurance, dumping a useless airbag would mean an OEM could earn a higher profit margin on tens of thousands of units produced or reduce the MSRP to help move those units. It also means the automaker has less mass to hinder fuel economy or that must be offset through the expense of lightweighting.

However, the IIHS did note Wednesday that some OEMs are using the airbags to help protect the unbelted occupants studied in federal crash testing. The research organization didn’t rule out that knee airbags improved safety in such collisions.

An interesting piece of 2017 research in Traffic Injury Prevention found that focusing on protecting belted occupants only might lead to safer designs for those passengers even if more harmful to unbelted occupants. It didn’t study knee airbags, however.

“Knee airbags had only a small effect on injury measures recorded by dummies in IIHS driver-side small overlap front and moderate overlap front crash tests,” the IIHS wrote. “In the small overlap test, knee airbags were associated with increased injury risk for lower leg injuries and right femur injuries, though head injury risk was slightly reduced. The airbags had no effect on injury measures in the moderate overlap test.”

In the real world, the probability of injury fell from 7.9 percent to 7.4 percent with a knee airbag equipped — but that wasn’t statistically significant.

“There are many different design strategies for protecting against the kind of leg and foot injuries that knee airbags are meant to address,” IIHS knee airbag paper co-author and IIHS senior research engineer Becky Mueller said in a statement. “Other options may be just as, if not more, effective.”

Article is care of https://www.repairerdrivennews.com/2019/08/07/iihs-knee-airbags-dont-do-much-for-belted-occupants/