It’s Tesla versus the world as Musk takes on insurers 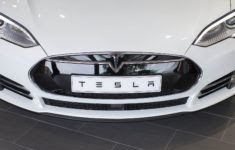 For the second time in three days, Elon Musk has shed light on how Tesla Inc. plans to take on massive industries outside the automotive and clean-energy realms.

Tesla’s chief executive officer said during Tesla’s earnings call Wednesday that the company is creating its own insurance product and hoped to launch it in about a month. The comments followed a detailed presentation Monday on how the electric-car maker has designed its own chips and a self-driving computer to power its autonomy efforts.

Musk has bristled for years at how some Tesla customers have paid higher insurance rates. Costlier coverage undercuts the case the company frequently makes that its cars are the safest in the industry, and that its Autopilot system is deft at helping drivers avoid crashes.

“It will be much more compelling than anything else out there,” Musk said of Tesla’s insurance product. “We have direct knowledge of the risk profile of customers, and based on the car, and then if they want to buy a Tesla insurance, they would have to agree to not drive the car in a crazy way. Or they can, but then their insurance rates are higher.”

Tesla announced in October 2017 that it was partnering with Liberty Mutual Insurance Co. to offer a plan called InsureMyTesla. Musk took issue earlier that year with reports that insurer AAA was raising rates on Tesla vehicles in some markets, citing high claim frequencies and costs. The CEO said during the company’s annual meeting in June 2017 that an internal Tesla study found the average cost of insuring a Model S sedan or Model X SUV was lower than for other premium vehicles.

Since InsureMyTesla debuted, some customers on Tesla’s online forum and on Reddit have complained Liberty’s quotes are still high. Musk also responded to a Twitter user in July of last year who said the insurer’s rates were almost double its competitors.

A Liberty spokesman didn’t immediately comment on the closely held company’s relationship with Tesla. Representatives for Tesla declined to elaborate on Musk’s remarks.

At least one Tesla analyst wasn’t thrilled to hear Musk talk about Tesla mounting a challenge against another industry after the electric-car maker’s worse-than-expected loss in the first quarter.

“We continue to feel robotaxis, insurance products, and other endeavours are distractions from the growing demand woes that are not being addressed which is a critical worry of ours at this juncture,” Dan Ives, an analyst at Wedbush Securities, wrote Thursday. He cut his rating on the shares to the equivalent of hold, from buy, and slashed his price target by $90 to $275.

This article is care of  www.insurancebusinessmag.com this article can be found here.