Jaguar unveils its stunning new car  its £60,000 all-electric car with a top speed of 200mph as it looks to take on rivals Tesla at their own game Read on!

By Tim Kelly 11th March 2017 May 14th, 2019 No Comments
It is a brand which has traded on its louche, bad boy reputation.
But now British car manufacturer Jaguar is to give customers a reason to feel self-righteous – by launching its first ever ‘green’ vehicle.
The car-maker today unveils a new all-electric sports car with a top speed of 200mph, in a bid to take on electric car pioneer Elon Musk – whose Tesla vehicles have revolutionised the market – and beat him at his own game. 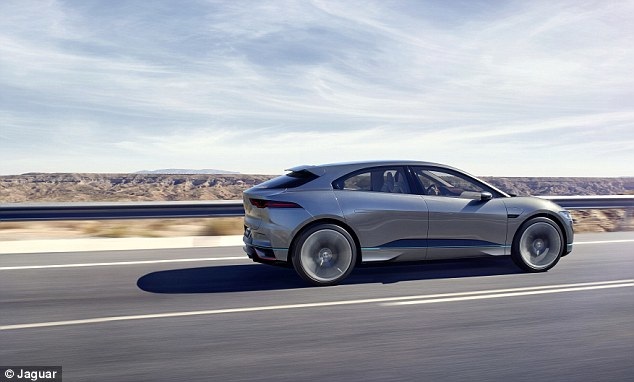 The i pace has a range of 310 miles, and can be recharged in under 2 hours.

Unlike a previous Jaguar marketing campaign which features British actors Tom Hiddleston, Mark Strong and Sir Ben Kingsley in ‘villainous’ Jag-driving roles, the new I-PACE aims to do good for the planet.
Jaguar says it has ‘torn up the rule book’ to create a svelte new 5-seater that combines ‘supercar looks, sports car performance and sports utility space’ in a vehicle that can be charged at home from the domestic mains.
It will accelerate from rest to 60mph in just four seconds and boasts a range of around 300 miles – enough, says Jaguar, to handle the average commute for a week on a single charge.
Watch the video here!
​
TMLhttp://www.dailymail.co.uk/news/article-3936768/Green-Jaguar-unveils-60-000-electric-car-speed-200mph-looks-rivals-Tesla-game.html#v-2384498669565557868
The wraps came off the new Jaguar I-PACE at a glitzy Hollywood world unveiling launch in Los Angeles with James Corden, Michelle Rodriguez, models David Gandy and Miranda Kerr and host of other stars among the guests.
Jaguar said the vehicle – priced from just under £60,000 – marked a ‘revolutionary’ leap and ‘the start of a new era’ for the UK car-maker.
Design director Ian Callum said: ‘The I-PACE represents the next generation of electric vehicle design.
‘It is a preview of a five-seat production car that will be on the road in 2018.
‘This will be Jaguar’s first-ever battery-powered electric vehicle and opens a new chapter in the history of our legendary brand.’ 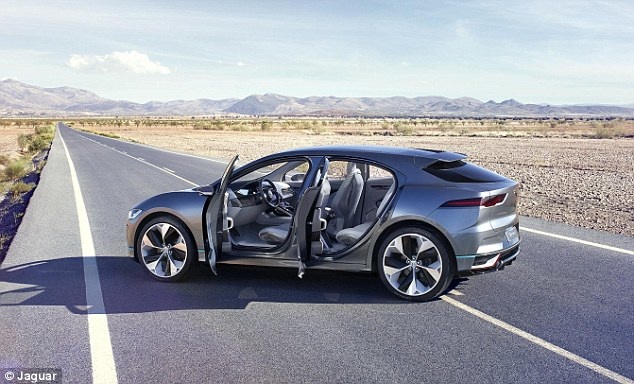 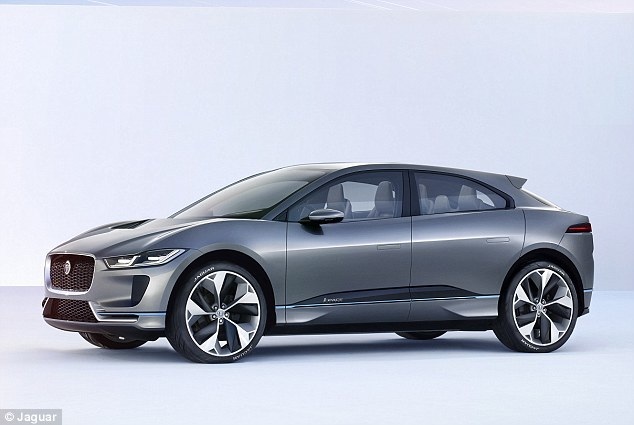 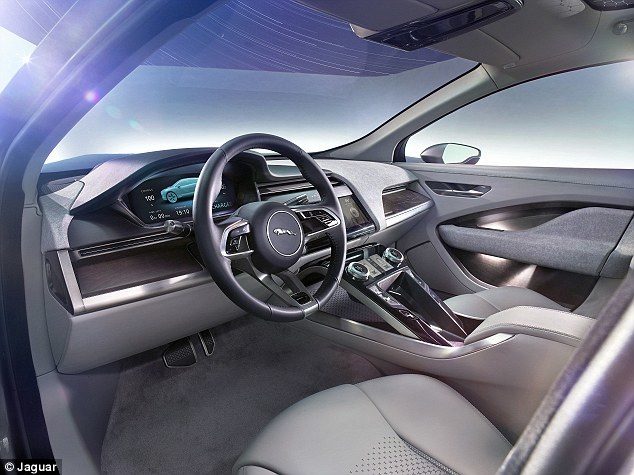 As with all Jag’s the interior looks very nice.. 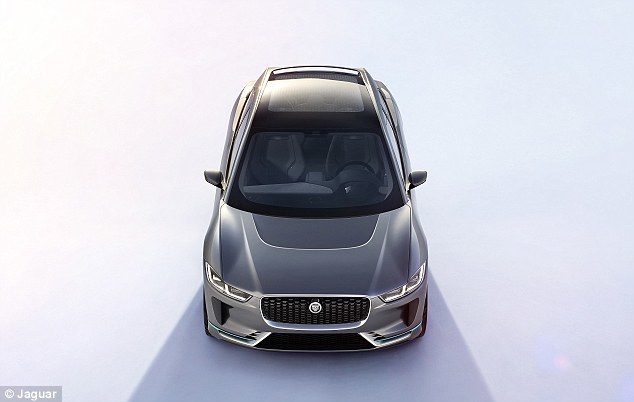 Described as a ‘long distance sprinter’, the I-PACE is powered by two electric motors – one attached to each axle front and back and together delivering 400 horsepower. equivalent to four Ford Fiestas.
Keeping the lithium ion battery pack flat under the floor also frees up lots more interior space in the cabin.
Running off electric power only means the new Jaguar has zero emissions of CO2 or other pollutants and is therefore exempt from road tax and congestion charges in London and other towns and cities.
It can be fully charged in two hours, or achieve 80 per cent of that in 90 minutes.The I-PACE is powered by two electric motors – one at each axle. Combined, they produce around 400hp, Jaguar said 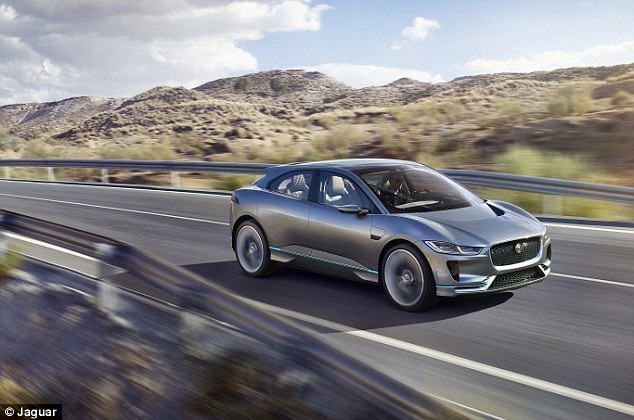 A full charge takes just two hours, though you can boost 80% of the battery power in a 90 minute session plugged into the mains 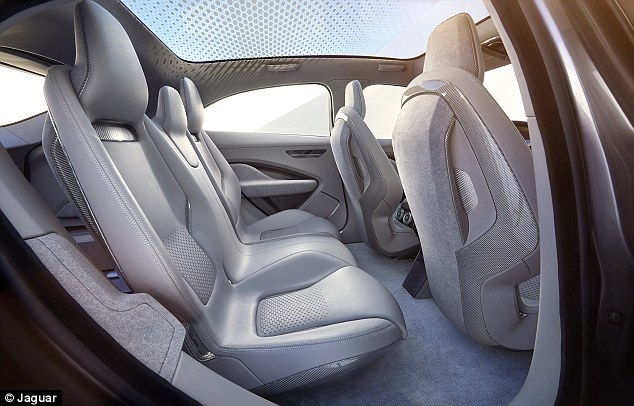 The concept I-PACE showcased ahead of the LA Auto Show presented the car as a five-seater, ideal for family useOrder books for the hi-tech plug-in five-seater ‘leaping cat’ opened today with the unveiling of the ‘production preview’ model ahead of the final production version which will be ready for first deliveries in 2018.
A Jaguar spokesman said: ‘With an average daily commute of 25 to 31 miles, most customers will need to charge the car just once a week.
‘The battery can be charged at public charging stations, a dedicated wall box at home, or simply using conventional domestic sockets.’
Jaguar has already signalled its electric future by entering the Formula-E electric car championships and using the single-seat re-chargeable racing-cars as a test-bed and cheer-leader for its new electric vehicles. 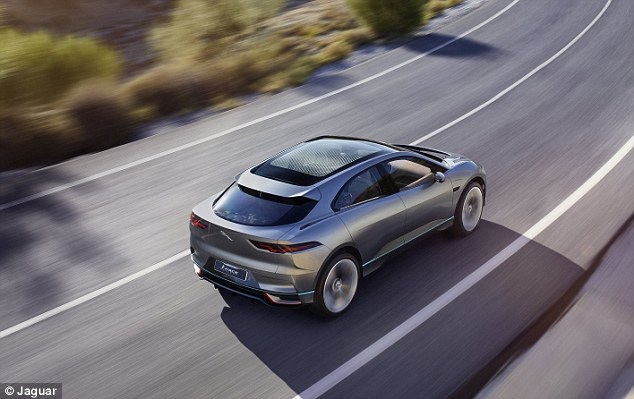 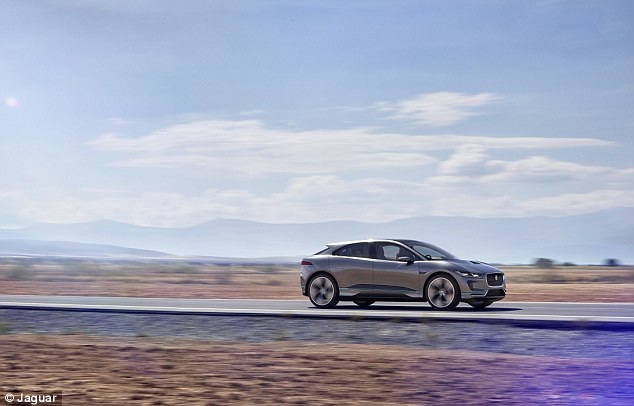 The I-PACE is certainly consistent with the looks of the existing F-PACE range, though don’t expect to see these 23-inch Nighthawk wheels feature on production models
The switch to electric is also necessary as Jaguar and other car-makers battle to meet tough new EU emissions targets or risk hefty penalties.
By 2020 Jaguar must cut the average CO2 emitted by all the cars it sells by 45 per cent, compared to 2007 or face ‘fines’ of up to £90 per car.
Even once the UK leaves the EU, Jaguar will have to comply if it wants to sell to mainland Europe.
Jaguar Land Rover is also understood to be investigating setting up a battery plant in Britain, possibly in collaboration with other manufacturers.