​The RAC have looked at the Home Office figures for the number of full-time roads policing officers, and it has fallen in 30 out of 42 constabularies.

Taking London out of the equation gives us a 5% drop overall, which in real terms means 352 less officers. The RAC’s head of external affairs, Pete Williams, said:

“Overall, these figures make for grim reading and are likely to be met with dismay by law-abiding motorists. While some of the numbers may be explained by organisational changes, such as officers taking on multiple roles and police forces working in partnership to tackle crime, the data still clearly shows that a majority of forces have seen a further fall in the number of officers whose primary responsibility is tackling crime on our roads.” 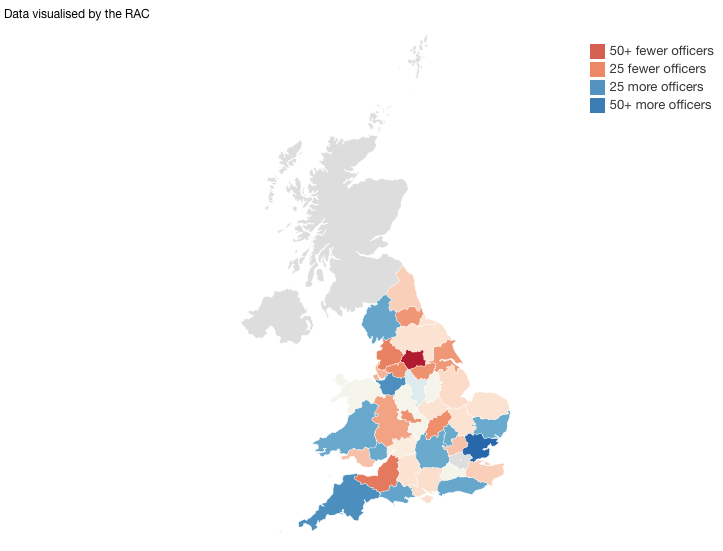 “We are acutely aware that the police are doing their best to manage challenging budgets and scant resource; however the sustained reduction in roads policing officers is at odds with the consistent number of serious motoring offences being committed and the concerns already expressed by motorists around the lack of visible police presence on our roads.”

“These findings also beg the question whether forces are increasingly turning to technology to enforce the law. Fixed speed cameras are a common sight on many roads, including on the hundreds of miles of highway being upgraded to smart motorways.”

“However the majority of motoring laws that exist to make our roads safer still rely on a physical officer present to either apply the law, or deter drivers from committing an offence in the first place.”

These figures equate to a more substantial drop of 27% since 2010. While some of you may well be cheering at the thought of less police on our roads, is it really a good thing? As Mr Williams mentions above, technology seems to have taken over a lot of the police work, but its primary purpose is to issue speeding fines and identify non-legal drivers. Surely there is far more to policing our roads than generating automated fines?

The biggest single drop was in West Yorkshire, where 91 less officers are now specifically tasked to keep the roads safe.

What are your thoughts on how the police handle motoring offences and education? Too many speed cameras? Not enough education? What could they do differently without stretching an already scant budget? Let us know your thoughts in the comments section below.