By Tim Kelly14th February 2020No Comments 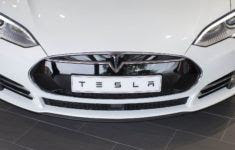 The driver who died after his Tesla crashed into a highway barrier while using autopilot had previously complained about the system aiming him towards the same barrier, according to newly released documents from the National Transportation Safety Board.

The March 2018 crash killed an Apple engineer who was on his way to work near Mountain View, California.

The NTSB investigation found that the man had previously complained about his Tesla steering him toward the concrete barrier that eventually became the scene of the fatal crash.

“Many times, when the driver went past the crash location in the left lane, the Tesla would steer left toward the gore point area and he would have to manually take control to stay within the left lane,” the NTSB documents stated.

“The family explained that it happened so often that he had told both his brother and his wife about the problem,” it added.

The man even attempted to show his family how the car steered left when they passed the location once, the documents said.

When he brought the car to a Tesla service center for a door issue, he also told a service technician about the problem.

The man’s phone data showed the game “Three Kingdoms” was active at the time of the fatal crash.

The NTSB also released information about a second fatal crash involving Tesla’s autopilot in Florida in May 2019.

The driver engaged the autopilot system about 10 seconds prior to the crash, according to the NTSB, and his hands were not detected on the steering wheel at the time of the crash.

Finally, neither the driver nor the vehicle’s autopilot system executed evasive measures before the car “under-rode the semi-trailer, shearing off its roof and continued south for approximately 1600 feet before coming to a stop in the median.”

The NTSB released photos showing the Tesla with its roof sheared off after it slid under the semi-trailer.

The trove of NTSB documents on the two crashes come at a time when the safety of autonomous vehicles has been in the spotlight as many push to expand the technology.

At a hearing on Capitol Hill Tuesday with a subcommittee of the House Committee on Energy and Commerce, lawmakers argued that the U.S. will fall behind if it doesn’t ramp up support of autonomous vehicles.

“There’s a global race to AVs. Do we want China to win that race? Or do we want to lead?” Rep. Cathy McMorris Rodgers, R-Wash, argued. “Do we want all the safety, faster traffic and mobility benefits to go abroad, or do we want to win this future and deliver for the American people?”

Rep. Debbie Dingell, D-Mich., echoed that, “It’s critical that America be at the forefront of innovation by leading the development in this technology.”

“If we don’t, we’re going to lost our competitive edge in this critical space,” she added.

Tesla did not immediately respond to ABC News’ request for comment Wednesday, but emphasized safety as a priority on its website, saying its vehicles “are engineered to be the safest cars in the world.”

“Model S, Model X and Model 3 have achieved the lowest probability of injury of any vehicle ever tested by the U.S. government’s New Car Assessment Program,” the website adds.

This article is care of https://abcnews.go.com/

This article can be found  here