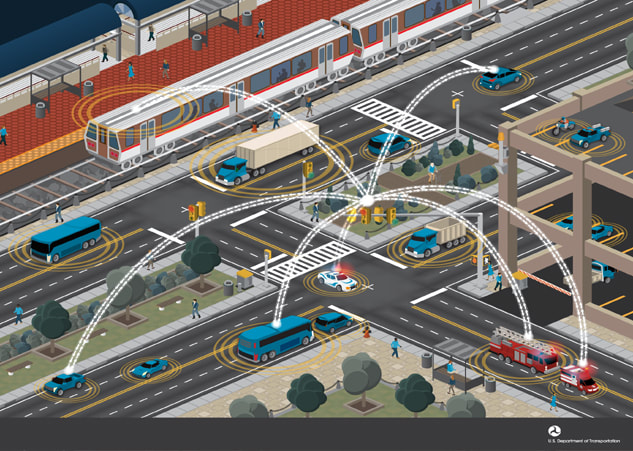 ​Introduction
Road transport is an essential service in society, but the burden of traffic crashes and Pollution is immense. European data show that road accidents in the EU countries cause about 250,000 seriously injured people every year, with 28,000 fatalities in 2012 (Kearns & Kidd, 2013). US data in addition, illustrate that automobile crashes led to 34,080 fatalities in 2012 (National Highway Traffic Safety Administration (NHTSA), 2013), where about 90% of the cases were attributed at least partially to driver error (Smith, 2013).

Many studies have shown the positive impact of ADAS on traffic accidents, e.g. (Golias et al.,2002; Jermakian, 2011; Kahane & Dang, 2009; Kuehn et al., 2009; National Highway Traffic Safety Administration (NHTSA), 2000, 2005). Electronic Stability Control (ESC) and Antilock Brake Systems (ABS), which prevent a large proportion of both fatal and nonfatal crashes (Kahane & Dang, 2009), are now mandatory in new vehicles (iMobility Forum, 2013). This paper focuses on further ADAS, which are optional in a wide range of vehicles. Among them, the Implementation Road Map Working Group of the European eSafety Forum has selected those expected to reduce road fatalities and emissions in the short- and medium-termin Europe (eSafety Forum, 2008; van Calker & Flemming, 2012). These systems are known as Priority Systems, and are classified into:

Blind Spot Monitoring systems, which use camera techniques with image processing or radar sensors to provide better vision into the blind spot area of a vehicle or supplemental information regarding an obstacle being in that area.
Adaptive Headlights systems, which comprise electromechanically controlled headlights to ensure optimum illumination of the lane in bends.
Obstacle and Collision Warning systems, which detect obstacles and warn the Drivers about an imminent collision.
Lane Keeping Support systems, which indicate or warn the drivers when leaving the lane unintentionally.
Emergency Braking systems, which detect obstacles and notify the drivers about animminent collision; in addition, in the case of a unavoidable collision the system then brakes automatically and forcefully.
Eco Driving Support systems, which assist and encourage drivers to keep driving in amore environmentally friendly manner by providing them with information about the fuel consumption, energy-use efficiency and appropriate gear selection.
A large number of field operational tests, driving simulator studies and accident analysesstatistics worldwide, have shown and quantified the safety, economic and societal benefits derived from the implementation of the priority systems. Jermakian (2011), for example, has analysed US passenger cars crash records for the period 2004-2008 derived from the US National Automotive Sampling System General Estimates System (NASS GES) and Fatality Analysis Reporting System (FARS). Results showed that forward collision warning/mitigation system could prevent up to 20% of the total 5.8 million reported crashes in the US per year, including 66,000 serious and moderate injury crashes and 879 fatal crashes.

In addition, adaptive headlights were found to have the potential to prevent or mitigate 2.45% of all crashes, including about 2,480 fatal accidents and 29,000 injury accidents per annum, while the blind spot monitoring systems could prevent 6.8%, of all crashes, and 393 fatal accidents and 20,000 injury accidents respectively. Finally, it was shown that the lane departure warning system could prevent or mitigate up to 3% of allcrashes, including 7,529 fatal and 37,000 injury accidents per year. In addition, data collected from insurance companies showed that the US fleet of two passenger car manufacturers equipped with different types of ADAS have reduced the overall number of insurance claims (Highway Loss Data Institute, 2012a, 2012b). In particular, for the first manufacturer it was found that the frequency of bodily injury liability, medical payments and personal injury protection dropped by 3.6%, 26.5%, and 7.2% respectively, when vehicles were equipped with blind spot monitoring systems compared to identical vehicles not equipped with the system (Highway Loss Data Institute, 2012a). For the second manufacturer, the frequency of property damage liability claims was reduced by 2.4%. On the other hand, it also indicated an increase by 1.3% concerning the frequency of collision insurance claims, but also an average reduction of 159$ (or 11.4% in medical payments) in the average severity of the claimed costs (Highway Loss Data Institute, 2012b). The same data also showed the positive impact of adaptive headlights on property damage liability claims, the bodily injury liability claims and the medical payments claims (Highway LossData Institute, 2012a, 2012b).

Accident analysis in Europe for the period 2005-2006 (Wilmink et al., 2008) showed that the safety benefits of lane keeping support, if fully deployed in the vehicle fleet, would reduce thenumber of fatalities by 15.2% and injuries by 8.9% in EU25. The authors also found thatemergency braking has the potential to reduce both fatalities and injuries due torear-end-collisions and collisions against fixed obstacles by 7%.

A field operational study by Najm et al., (2006) showed that automatic collision avoidance systems, integrating forward collision warning and adaptive cruise control, have the potential to avoid about 6 to 15% of all rear-end crashes or between 133,000 and 687,000 rear-endcrashes in the US per year. Furthermore, Benmimoun et al., (2013) found among 100 passenger vehicles that a combined system of adaptive cruise control and forward collision warning increased the average time-headways between vehicles on motorways by 16%. In addition, the number of critical time-headways (less than 0.5 s) is reduced by 73%, while the study also showed that when adaptive cruise control is active, fuel consumption on motorways is reduced by 2.77%. Finally, Vagg et al., (2013), and Strömberg & Karlsson, (2013) investigated the impact of eco-driving features in two different cases. The former, based on a field test of 15 light commercial vehicles in the UK, showed that an eco-driving assistance system reduced fuel consumption by 7.61% on average with a reduction forindividual drivers between 0.43-12.03%. Results were obtained by advising drivers toaccelerate more smoothly and enforcing the gear shift indicator advice. The latter, based on astudy carried out by a Swedish public transport operator on a bus line, involving 54 busdrivers, found that a combination of eco-driving training and eco-driving advice system could reduce fuel consumption by 6.8%.

Positive results were also derived by several driving simulator studies. In this respect it shall be mentioned that driving simulator studies, due to their controlled conditions, provide more specific information on human behaviour, but behaviour and accident risks in Simulators deviate substantially from real world conditions. Bueno et al. (2013), confirmed that the forward collision warning system in passenger vehicles can reduce the reaction time of the driver when braking, due to reduction of the time that the drivers need to process the visual target at higher cognitive level. Moreover, Muhrer et al., (2012), found that forward collision warning in combination with emergency braking system resulted in significantly fewer accidents in critical situations. However, they also found that test drivers maintained higher mean speeds with the forward collision warning (with emergency braking) when noun expected events (such as the lead car braking hard) occurred. Finally, Dogan et al., (2011) showed that drivers would be less able to use eco-driving when the traffic environment is highly demanding, e.g. residential areas, and during critical situations. Results also suggest that performance on the fuel saving decreases under time pressure. On the other hand,concerns have been raised by simulator studies, regarding the impact of ADAS on drivingperformance. Jamson et al., (2008) for instance, found that the type of a system may have an impact on its adaptation from drivers. In particular, they found that the benefits of adaptiveforward collision warning systems were demonstrated only for aggressive drivers, wherea smarginal effects were found for non-aggressive drivers.Thus, field operational tests, driving simulator studies and accident statistics indicate substantial benefits of the priority systems, which are commercially available already sincethe early/mid 2000s. Table 1 illustrates the ADAS benefits based on the literature.