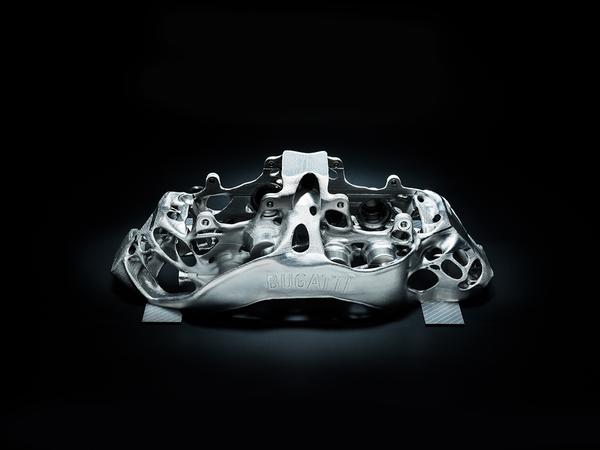 ​400W lasers, over 2000 powder applications, and more than 60 hours per part; Bugatti’s inkjet is better than yours

​Bugatti made headlines last September when the Chiron set a ludicrous 0-249-0mph time of just 42 seconds (a record since been broken by Koenigsegg, which needed six fewer seconds to achieve the same feat). Now, however, Bugatti is again setting new standards in the field of shedding tremendous amounts of speed very quickly – albeit in a rather different way.
Forged from blocks of high-strength aluminium alloy, the Chiron already makes use of the world’s largest and most powerful calipers. Titanium would, of course, be preferable, but utilising the metal has to date been impractical, due to the difficulty of milling or forging components from the aircraft grade material.

But working with the German Laser Zentrum Nord, Bugatti’s engineers have apparently found a 21st century solution to the problem. They’ve designed what is both the first 3-D printed brake caliper and the world’s largest functional 3-D printed titanium component, and in doing so have increased strength whilst decreasing weight by 40 per cent.

​The part was manufactured over a period of 45 hours using the 3-D printer at Laser Zentrum Nord – the largest in the world of its kind. During the process, 2,213 layers of titanium powder were deposited in the shape of the caliper, before being melted together one by one using the printer’s four, 400W, lasers.
Heat treatment followed, eliminating residual stress and ensuring dimensional stability by exposing the caliper temperatures of up to 700°C. The surface was then smoothed in a combined mechanical, physical and chemical process which “drastically improves fatigue strength” before all functional surfaces, such as the piston contact surfaces or threads, were further perfected over an additional 11 hours.

Understandably, then, Bugatti’s Head of New Technologies Frank Götzke says, “It was a very moving moment for the team when we held our first titanium brake caliper from the 3-D printer in our hands.”

Vehicle trials for use of the 3-D printed caliper in series production are set to start soon, with the engineers insisting that production times, especially for machining, will be drastically reduced as the product moves forward. If all goes to plan the results can reasonably be expected to filter down to other VW products in the coming years, meaning it may not be too long before 3-D printed components make a lack of available parts a thing of the past.