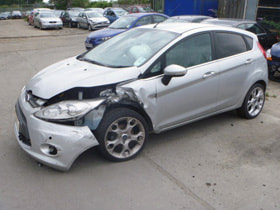 West Midlands Police (WMP) recently posted on their website that they are to lobby government and the insurance industry amid concerns the practice of selling written-off cars for repair is fuelling a surge in vehicle theft.
Investigations run by the force suggest criminal gangs are snapping up damaged cars rated insurance write-offs from salvage auctions – and then stealing cars to order for the parts they need to fix them and sell for a hefty profit.

Around five times more vehicles – mainly luxury marques like Audi, BMW and Range Rover or other high-spec cars – are sold at auction as repairable write-offs compared to write-offs to be scrapped for spare parts.

And it’s suspected the imbalance is leading criminal gangs to steal cars – some during violent car-jackings – for matching spares rather than buy expensive factory-made parts from manufacturers.

“And there’s a correlation between the types of cars being stolen and those available as repairable write-offs; it is our firm belief, supported by police intelligence, that this increase is being driven by the criminal demand for car parts.

“We will be raising our concerns with government, the Association of British Insurers and online auction and sales sites.

“A review and improved regulation on the re-sale of insurance write-offs is needed. We’ll be asking if so many badly damaged cars should be offered as repairable write-offs and, where they are, salvage auctions should stipulate that buyers have the correct breaker’s licences needed to dismantle vehicles.

“We also want salvage auctions to introduce a ‘know your customer’ framework and have clear structures in place to report suspicious buyer activity.

“In addition, we’re also meeting with online sales sites to encourage them to better protect customers who could unwittingly end up buying a car that’s been repaired using parts from a stolen vehicle.”

Stolen cars are broken down at so called ‘chop-shops’ – back street garages or industrial estate units – sometimes in a matter of hours before repaired cars are sold on through online auction or sales sites.

DCC Rolfe also fears there is a serious public safety concern around the re-sale of repaired write-offs with some vehicles being passed on without features such as airbags.

She explained: “There is no requirement for repaired write-offs to be checked before being sold…they can be returned to the road without an inspection until it reaches MOT age.

“Many of the vehicles sold at salvage auctions having been written-off by insurers will have been involved in serious collisions where airbags have been deployed.

“Under the Pyrotechnic Articles Regulations Act, they should be replaced by an authorised economic operator or professional user – but no procedures appear to be in place to ensure such replacement of airbags meet regulatory requirements.

“In one example I’m aware of a repaired vehicle was sold without any side impact air bags being fitted – and clearly that’s a very serious road safety concern.”

“Not only are they tackling the problem head on with a robust police response they are also talking with the insurance industry and government to fix a broken system.

“Motorists across the West Midlands have seen the chance of their vehicle being stolen more than double in just a few years.

“I’ve been leading a national campaign to reduce the number of vehicle thefts. The police play a crucial role and it is good to see them taking the issue so seriously.

“That said, I also want to see manufacturers to do much more to tighten vehicle security and make thieves’ lives more difficult.”

See the video link to this article by clicking on the following link: https://www.youtube.com/watch?v=3Fyt6GtqQ2k&feature=youtu.be

If anyone suspects a location is being used as a chop-shop for stolen vehicles they are urged to call the independent charity Crimestoppers anonymously on 0800 555111 or West Midlands Police on 101.

If this is just the West Midlands, how does the rest of the country compare? Let us know your thoughts on this subject by contacting us at info@atfpro.co.uk We’d love to hear your views.

In response to the ‘West Midlands police claim that the way the code operates means there are more repairable write-offs available than there are parts to fix them’, we came across an article on the Association of British Insurers (ABI) website by Rob Clark, Niche Motor Underwriting Manager at Ageas (who represented the ABI at the recent National Stolen Vehicle Workshop), stating the following:

‘As an industry, we share the concerns of the police that criminals are abusing the system to make money. The fact that the rate of vehicle theft is increasing is concerning, let alone any increase of unsafe vehicles on the road. We are working alongside the police to help find a solution to this issue. I attended a workshop last month where the current evidence was considered and ways forward are now being worked on.

It is in no one’s interests that insurers start ignoring salvage guidelines and scrapping a higher number of fixable cars, purely to try to make life harder for some unscrupulous lawbreakers. I ap
plaud West Midlands Police for having recently launched a crackdown on the garages where stolen cars are being processed. The other key step should be increased scrutiny of the motor vehicle market and tighter rules for vehicle repairs.
There is currently no requirement for written off cars to undergo an individual vehicle approval (IVA) test before being put back on the road. Shockingly, this allows criminals to buy a written-off shell, “repair” it with stolen parts and put it back on the roads without any scrutiny. Addressing this situation with the DVSA seems an obvious place to start to make it harder for these criminals to exploit the system, and to increase protection for car buyers.’

To read the full article click on the following link: https://www.abi.org.uk/news/blog-articles/2018/08/dont-write-off-the-salvage-code/