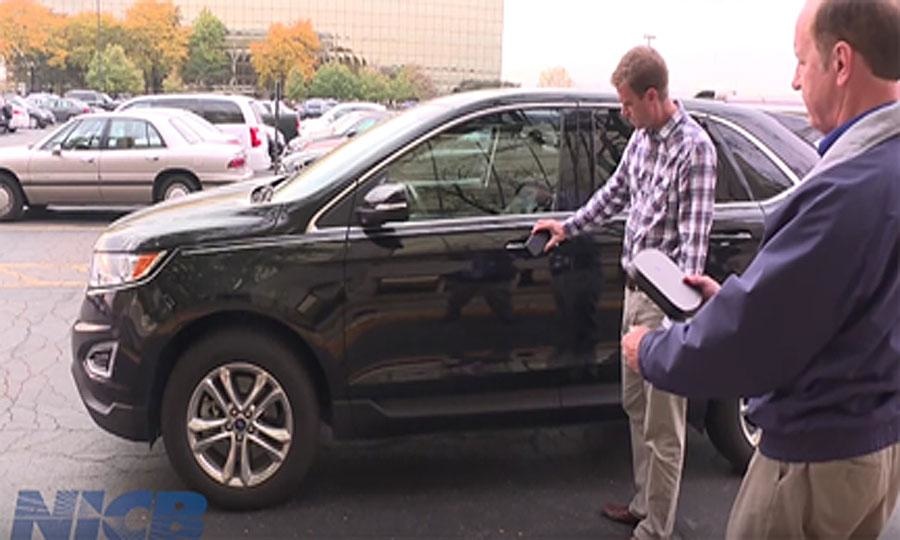 ​Thieves could be using a new technology to break into and drive away with vehicles that have push-button ignitions without a trace of evidence, and there might not be much that potential victims can do to prevent it.

The National Insurance Crime Bureau today said it obtained and tested a so-called “mystery device” that can allow a thief to break into a vehicle without leaving behind any of the traditional pieces of evidence such as broken glass.

The device, which comes in two pieces, works by picking up a signal from the vehicle’s key fob from a distance of up to 10 feet. Once the signal is received, the device transfers the data to a smaller “relay box” that can be used to unlock and start the vehicle.

NICB spokesman Roger Morris said the bureau, working with used-car retailer CarMax, tested the device on 35 makes and models at various locations, including new- and used-car dealerships, in the Chicago area over a two-week period. He said the NICB was able to open 19 of the vehicles and was able to drive away in 18.

Combating these devices could prove to be the latest battle between automakers and criminals in the modern era. Concerns over hacking and other cybersecurity issues have gained prominence in recent years as vehicles become more connected. 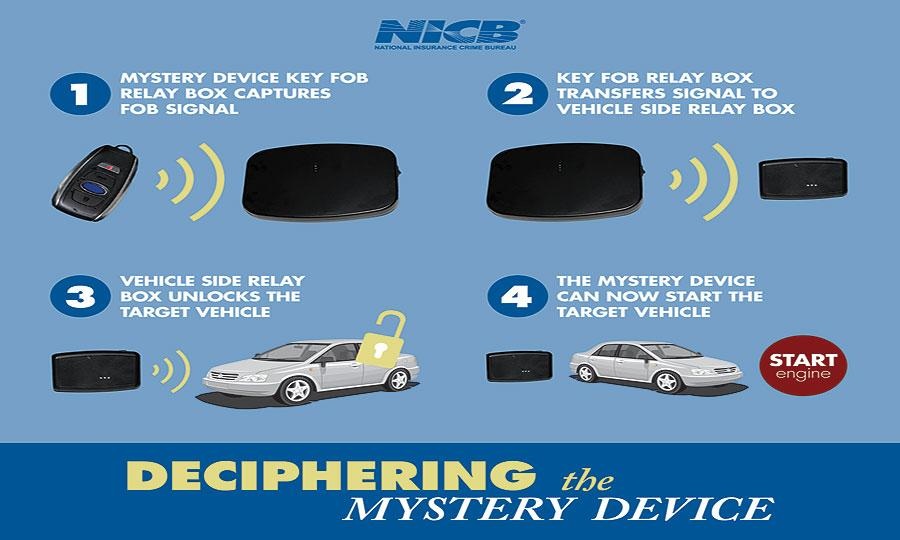 Morris said it is impossible to know how many vehicles might have been stolen using these devices because no evidence is left behind. He said owners and law enforcement are often unaware of such technology existing, though the NICB first noted a rise in the use of such technology in 2014.

The “scary part is that there’s no warning or explanation for the owner,” NICB CEO Joe Wehrle said in a statement. “Unless someone catches the crime on a security camera, there’s no way for the owner or the police to really know what happened. Many times, they think the vehicle has been towed.”

Auto manufacturers must be diligent in making sure they adapt their technology to counter these devices, Morris said, while noting that thieves will be sure to do the same in response.

“It’s a matter of tug of war between manufacturers and thieves,” Morris said.

As for vehicle owners, Morris said they should keep valuable items out their vehicles, keep their key fobs on them at all times and should park in secure or crowded areas whenever possible. Police and vehicle owners should also keep an eye out for any suspicious activity near parked cars.

However, he said, completely preventing such thefts might prove to be impossible, as long as the thief is within a radius small enough to pick up on the key fob’s signal.

“If these thieves know the device works on a certain make and model, I don’t know there’s a lot you can do about it right now,” Morris said.

NICB said in a statement that it obtained the device “via a third-party security expert from an overseas company” that provides “manufacturers and other anti-theft organizations the ability to test the vulnerability of various vehicles’ systems.”

Morris said that while thieves can purchase devices from various sources, a thief with skills in computer technology could build one on his own, making cracking down on the makers of the devices difficult.

“The manufacturers have made tremendous strides with their technology, but now they have to adapt and develop countermeasures as threats like this surface,” NICB COO Jim Schweitzer said in the bureau’s statement.

You can reach John Irwin at jirwin@crain.com