By Tim Kelly15th January 2020No Comments 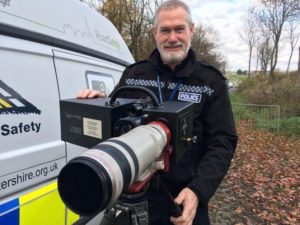 The analysis – based on Home Office data and carried out by Dr Adam Snow of Liverpool John Moores University and Doreen Lam of the RAC Foundation – shows that across the 43 constabularies of England and Wales, the vast majority (97%) of offences were detected by speed cameras, aided by some counties’ use of long-range cameras.

However, the data also reveals the postcode lottery when it comes to speeding tickets, with drivers particularly at risk in West Yorkshire. The county topped the list with 181,867 people caught speeding in 2018-19.

At the other end of the scale, Wiltshire Constabulary only caught 807 people speeding, Cleveland caught 11,937 and Derbyshire 12,256. Wiltshire turned off its speed cameras in 2010 but it’s not a move being emulated elsewhere; Wales has recently announced it is to deploy more speed cameras, in order to clamp down on speeding and other dangerous driving practices.

The RAC Foundation research also shows speeding was by far the biggest motoring offence for 2018-19, accounting for 84% of the 2.9 million offences recorded in the two countries.

In fact, according to recent Transport for London research, speeding has now become socially acceptable, with drivers no longer thinking of it as a risk – even though in 2018, “exceeding the speed limit” was recorded as a contributory factor in 13% of fatal crashes in Great Britain where at least one factor was identified.

That’s also despite the introduction three years ago of a new penalty structure that means drivers convicted of the highest level of speeding can be fined 150% of their gross weekly income as well as receive six points or a disqualification of up to 56 days.

Drivers caught speeding are most likely to end up on a speed awareness course; the RAC Foundation research found that of the 2.4 million speeding offences detected in 2018-19, 44% resulted in the offender being sent on such a course. And research published for Road Safety Week in November 2019 found that speed awareness courses are by far the most effective means of reducing reoffending.

However, 34% of speeding tickets in 2018-19 attracted fixed penalty notices (FPNs), 12% were later cancelled and 10% resulted in court action.

Steve Gooding of the RAC Foundation said: “The simple rule for drivers who don’t want to risk ending up with a speeding ticket is not to break the limit in the first place.

“Where limits are properly signposted and clearly feel right for the road in question then motorists have no excuse for going faster, but that means highway authorities also have a responsibility to make sure the limits they set are appropriate and to avoid instances where the limit repeatedly ‘bounces’ up and down along a single stretch.”