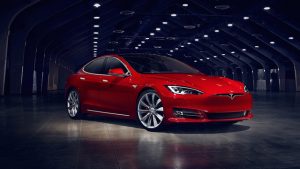 BEIJING/TOKYO (Reuters) – Electric vehicle (EV) maker Tesla Inc (TSLA.O) said on Friday a single battery module caused a car to catch fire in Shanghai and it had revised its vehicle settings to further protect its batteries following an investigation into the incident.

The company said in a statement posted on its Weibo social media account that the joint investigation team had conducted an investigation and analysis of the battery, software, manufacturing data and vehicle history.

The investigation found no system defect, and the initial findings show the incident was caused by a single battery module located at the front of the vehicle, Tesla said.

Japanese battery manufacturer Panasonic (6752.T) supplies Tesla with battery cells, but not modules, which are a group of cells joined together.

The company has revised the charge and thermal management settings on Model S and Model X vehicles via an over-the-air (OTA) software update, to help further protect the battery and improve battery longevity, the statement said.

Tesla has said its EVs are about 10 times less likely to experience a fire than petrol-powered cars.

Tesla’s local competitor Nio Inc (NIO.N) said on Weibo on Thursday that some battery modules in its cars might have safety issues as well, and that it would recall 4,803 units after three fire incidents in China.

Have you ever been charged an “increased excess” to use your own Vehicle body repairer by your insurer? Pissed off? want your #moneyback?