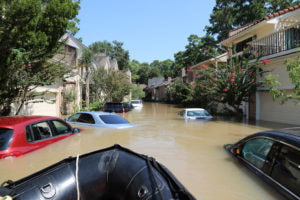 ​How do you remove hundreds of thousands of damaged cars from a massive city still mired in water and muck? Tow-truck driver Alex Toll will tell you: one vehicle at a time.

Toll is part of an army of more than 1,000 tow truck pilots contracted by Insurance Auto Auctions Inc (IAA), a unit of Carmel, Indiana-based KAR Auction Services Inc. Their job is to extricate vehicles swamped by Hurricane Harvey so insurance companies can begin the claims process.

Along with rival Copart Inc, IAA dominates the U.S. auto-salvage auction market. The company has a dedicated team that handles hurricanes and other large disasters for itsinsurance customers.

IAA set in motion a massive logistical operation in Houston before Harvey hit last weekend. It is now doing the same for Hurricane Irma, which is bearing down on Puerto Rico and the U.S. Virgin Islands and could hit Florida by this weekend.

Just how many vehicles in South Texas were walloped by Harvey is not yet known. Cox Automotive, owner of the Autotrader online automobile market and Kelley Blue Book car valuation service, has estimated that between 300,000 and 500,000 vehicles were severely damaged or destroyed. That translates to potential losses of between $2.7 billion to $4.9 billion.

But before most Houston flood survivors can replace their cars, their insurance companies must first process claims. The firms will recoup some of their losses by re-selling flood-damaged vehicles, some for scrap metal and parts, others for transportation.

That salvage effort begins with drivers such as Toll. On Tuesday he was hustling to pick up a car from a subdivision in the Houston suburb of Baytown where all 240 houses were flooded. Along the way he dodged piles of soiled furniture, soggy carpet, old Christmas lights, even a water-logged piano.

“I’m not going to change the world,” said the 43-year-old, whose bushy beard is flecked with gray. “But I can help people get their cars replaced.”

BIGGEST-EVER SALVAGE EFFORT?
Industry executives said Harvey could well end up being the biggest U.S. auto-salvage operation on record after Harvey dumped more than 50 inches of rain on parts of the nation’s fourth-largest city.

Flooding during Hurricane Katrina in 2005 damaged about 600,000 vehicles; 250,000 were submerged by Sandy in 2012, according to estimates by Carfax, a service that collects and sells data on the condition of used vehicles.

“There’s a lot of unknowns right now,” KAR Chief Executive Officer Jim Hallett said. “We don’t know how many vehicles were under water and what the total volumes look like” with Harvey.

Insurance firm GEICO, which works with IAA and is owned by Warren Buffett’s Berkshire Hathaway Inc, said it has logged around 30,000 Harvey-related auto claims. Farmers Insurance, which in not an IAA client, said it had around 9,000 claims so far in the area.

What’s clear is that many of those cars could end up back on the road in the U.S and elsewhere, and used-car buyers need to look sharp in the coming months.

Typically, about half of vehicles damaged after a flood are driven again, according to Carfax spokesman Chris Basso. The company estimates there are about 325,000 flood-damaged vehicles currently operating in the United States.

After Hurricane Katrina, thousands of cars submerged for weeks were cleaned up and sold as undamaged used cars, according to a 2009 Justice Department document. The government received several reports of consumers who perished in crashes after buying flood-damaged vehicles that had their airbags removed.

The federal government tightened rules on damage disclosure after Katrina. But how and what gets revealed on a vehicle’s title varies by state, said Basso of Carfax. He said Texas is among those requiring specific disclosure of flood damage.

Still, the non-profit National Insurance Crime Bureau (NICB) has warned that cars flooded by Harvey may be fraudulently re-registered to avoid declaring damage.

Under federal law, IAA must tell the National Motor Vehicle Title Information System (NMVTIS) that a flooded car was salvaged twice: when an insurer assigns an insuranceclaim to them, and when they sell the vehicle, regardless of whom it is sold to.

The IAA’s Kett said the company also voluntarily reports all flood-damaged vehicles to the NICB and to federal regulators. He recommends consumers check a vehicle’s history before buying it.

Kett said freshwater flooding such as that caused by Harvey imposes less damage than salt water in, say, the tidal surge during Sandy, so he anticipates a lot of interest from prospective buyers hunting bargains.

IAA plans to market these vehicles in 110 countries as well as the United States. Buyers can bid for them at auction sites across Texas, and through the company’s online sites.

The company salvaged 65,000 total-loss vehicles for resale after Sandy and 20,000 after Katrina.

REVVING UP TO MEET HARVEY
Harvey’s severe flooding took many Houston residents by surprise. But IAA was gearing up long before the storm made landfall.

As soon as the hurricane’s path toward Houston became clear, the firm acquired or leased hundreds of acres where it could store damaged cars, in addition to the property the company already owned in the area.

“We were deploying people into the market ahead of time and in surrounding markets,” IAA’s Kett said.

The company has set up a mobile dispatch center and purchased an additional 35 forklifts to push metal around. IAA also has 30 people dedicated to resolving auto titles at the Texas state capitol in Austin.

It put out a nationwide call for more than 1,000 tow-trucks of all shapes and sizes. Toll, a Miami resident who was working in Nashville at the time on assignment for IAA, got word late Friday. He arrived in Houston the next night.

“In this business, we’re always packed and ready to go,” Toll said.

He and others are now working 12-hour, 7-day weeks picking up cars and hauling them to storage lots. They use IAA’s “Tow App” that shows insurers in real time when vehicles have been picked, processed and photographed for claims.

Toll has worked disasters for IAA for eight years. He spent 103 days in the New York area after Sandy. A Cuban American with tattooed arms and a calm, philosophical nature, Toll says the work pays well because of the long hours. He says he also gets satisfaction from helping people get their cars replaced.

Scott Guenther, who runs the IAA region that includes Texas, estimates it could take five months for all the totaled Harvey vehicles to be sold at auction.

Meanwhile, the company is bracing for Irma, which appears to be moving towards Florida, the nation’s third-largest state.

“We don’t know where (our) people will go yet, but they are ready to go,” IAA spokeswoman Jeanene O’Brien said.

Toll may be among them. With two young sons in Miami, he has more than rescuing cars on his mind. He’s prepared to leave Houston at the first sign of trouble.

“I am concerned about it,” Toll said. “But nine times out of ten when they say it could hit Florida it doesn’t, so that’s what I’m hoping for this time.”